Ettel Gruber, my great-grandmother, the wife of Anschel Gruber, died in Radauti in November, 1946. Her gravestone is the first I am conscious of seeing that represented a woman with candlesticks.

Well into her 80s at the time of her death, she survived World War II deportation to Shargorod, in Transnistria, and walked back from Radauti from there. (Or at least the story goes: Until my trip to Romania in September 2009 with when I traveled to Radauti with two of my cousins, Arthur Schankler and Hugh Rogovy, and Hugh’s son, Asher, I had always heard that Ettel lived to be up in her 90s. But the registry document for her marriage to Anschel, which we found at the Radauti town hall, indicated that she was only 19 at the time of her wedding in 1880.)

A positive and dedicated woman, fair and kind in all her doing, (she) offered hospitality and charity to the poor and set a full table for the Tzaddikim.
Ettel, daughter of Ephraim, died  17 Heshvan, 5707. 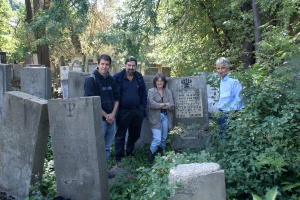