Some time ago, I wrote a post including my aunt Pearl Gruber Kaplan’s recollections of her mother, my grandmother, Rebecca (Rosenberg Gruber) Rifkin, lighting the candlesticks on Friday night.

Here is a recent picture of Aunt Pearl, with a still life she painted of the Shabbos candles, and the candlesticks themselves. Photo was taken by her son, Robert (Tex) Kaplan. 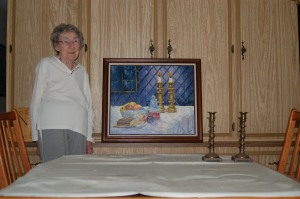 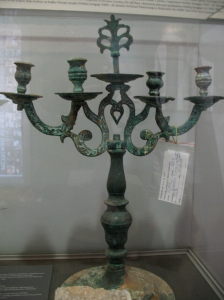 I was in the Polish town of Oswiecim last week — the town outside which the infamous Nazi death camp Auschwitz is located. Before World War II, Oswiecim was a fairly typical small town, with a majority Jewish population, known in Yiddish as Oshpitsin…I’ve written about the different ways the town in viewed in the past, in articles such as “Auschwitz, Place of Memory vs Oswiecim, a Living City” and  in my 1994 book Upon the Doorposts of Thy House: Jewish Life in East-Central Europe, Yesterday and Today, whose last section centers on my experiences when I was snowbound at Auschwitz for four days back in March 1993…

Back in 2004, I reported on how archeologists had unearthed a trove of buried ritual objects from Oswiecim’s destroyed main synagogue.

The objects, which had been buried since the Holocaust, include three bronze candelabra, a bronze menorah, 10 chandeliers and a ner tamid, or eternal lamp, that once hung before the synagogue ark. Tiles, marble plaques, charred wood and other material from the synagogue, which was burned to the ground in 1939 by invading Nazi forces, also were uncovered.

“We didn’t include a miracle in our operating budget, but now we have to deal with one,” said Tomasz Kuncewicz, director of the Auschwitz Jewish Center, a prayer and study complex near the site of the notorious death camp.

The find represents all the interior moveable furnishings of the synagogue. “It’s amazing to have found something so complete,” Kuncewicz said. “It seems as if such a discovery never happened before.”

These objects are now given pride of place in the exhibition at the Auschwitz Jewish Center. Among them are candlesticks that resemble those on many gravestones marking the resting places of Jewish women.