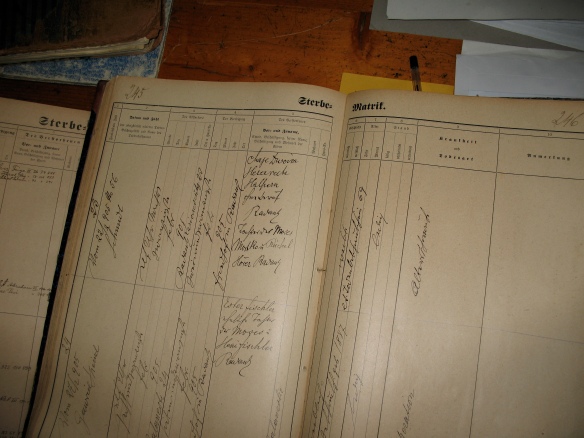 The Yiddishist Dov-Ber Kerler, of the University of Indiana, has kindly provided a translation of the epitaph on Chaya Dvoira’s tomb. It adds a little confusion, as it notes her date of death in 1904, while the registry book shows it as February 22, 1905…or maybe that’s just the date the death was entered…

At the tomb of my great-great grandmother (my Grandma Becky’s grandmother) Chaya Dvoira Herer Halpern, in the Radauti Jewish cemetery. She died Feb. 22, 1905 at the age of 69)

My cousins all left, but I have stayed in Radauti for a couple more days, continuing my photo documentation for my (Candle)sticks on Stone project — and also carrying out some more family history research — and making discoveries, some of them even rather surprising: the grave of my great-great grandmother; the house where she lived; questions about my grandmother’s birth date and circumstances; even the date of my great-grandfather Anschel’s death.

I’m not obsessive about genealogy by any means, and in fact — despite the fact that I have visited my great-grandmother Ettel’s grave on several occasions over the year (click HERE to see the progression) — I have never really looked into our family history in a serious way.

But our session at the town hall with Dorin Frankel last week, and our subsequent trip to Vicovu de Sus and discovery of what we believe was the house where our great-grandfather Anschel lived in 1880, left some loose ends that needed tidying, or at least some questions that I wanted to try to answer. I couldn’t leave town without at least trying to resolve them.

One of these was a street address in Radauti — strada Larionescu 20 — that my second cousin, Rae Barent, who has made a serious effort a tracing family history, sent — and which was confirmed by the records I looked at during a second session with Dorin at City Hall yesterday. This was the address where my great-great grandmother, Chaya Dvoira Herer Halpern, lived.

I also found out, by correlating the information found in the archives (and some sent by Rae) with info at the Radauti Jewish heritage web site (lots of cheers to the people who put together the amazing documentation material on the cemetery) that Chaya Dvoira, the daughter of Moshe (Moses) Mortko and Ruchel Hörer, died Feb. 22 1905 at the age of 69 — the registry gave her cause of death as “old age” — was buried in the Radauti Jewish cemetery. It also described her as single, not a widow (which probably means that her marriage, like that of her daugher Celia — Zirl — and David Rosenberg, my grandmother’s parents, had not been formally registered with the city officials. From the registry, I could see that this was a fairly common practice.)

This morning, armed with the plot and row numbers I found on the Radauti cemetery web site for a “Chaya Dvoira daughter of Moshe Morko” who died in 1905, I returned to the Jewish cemetery. Mr. Popescu showed me the row — and I entered the tilting forest of stones, again crunching through the undergrowth in my boots. I had to scrutinize the Hebrew epitaphs on each one, testing my basic Hebrew to its limits. After half an hour or so, there it was: I could read the name. The stone is smaller than some of the others, but it has the typical braided candlesticks and hands raised blessing the flames, beautifully carved. And there are still traces of red and green paint. I pulled away a strand of stray vines: not sure what, if anything, I actually felt. Glad to be there; cognizant of distance, time, realms; the passing of time and history. Wishing the others could have been there too. Wondering what she looked like!

Amid the forest of stones, a piece of my distant past. The small stone on the left. Photo: Ruth Ellen Gruber

My cousins and I had tried to find Larionescu street, but in today’s city there is no record of it. Dorin Frankel, however, knew where it was — near the synagogue — and he walked with me there after our session yesterday morning at City Hall. The street name has been changed, but the house is still there — nicely maintained and modernized inside.

Looking into courtyard of house at Larionescu 20.

Other information I came across in the City Hall registry books, during a couple of hours there with Dorin Frankel:

— my great-grandfather Anschel Gruber (the one who lived in the house we found in Vicovu de Sus) died in 1914, possibly in September of that year. But his death wasn’t recorded in the registry until 1920. The book says he is buried in the Radauti cemetery.

— There is no birth record for my grandmother, Rebecca Rosenberg, who I thought was born in about 1895…. BUT there is a record of the birth to Rebecca’s parents, Zirl (later Anglicized to Celia) Halpern and David Rosenberg (not officially registered as married at the time), in Oberwikow, or Vicovu de Sus of TWINS on Sept. 25, 1899 — including a daughter Rifka (Rebecca in Yiddish) and a son, Jüdel, whose bris was on Oct. 2. The family left for the States in about 1906, but Jüdel’s death is included in the Radauti City Hall registry (though added in 1920), indicating he must have died very young.

(This duplicates a post on my Jewish Heritage blog.)
By Ruth Ellen Gruber
Sept. 3, 2009
I’m too tired to write much tonight. Suffice it to say that the Cousins and Candlesticks tour had its genealogical high spots…. We visited the tomb of our great-grandmother, Ettel Gruber, in the Jewish Cemetery in Radauti (where I have been three times before since 1978).

Thanks to the good efforts (and contacts) of Doru Losneanu, Mr. Dorian Frankel helped us go through records at the Radauti Town Hall. We found the marriage registry for the parents of both our Grandfather, Ephraim/Frank (that is, Anschel Gruber, widower, aged 34 and Ettel Lecker, single, aged 19) in 1880 and our grandmother, Rebecca Rosenberg (David Rosenberg and Celia Halpern) in 1902.

This also gave us the address in the village of Vicovu de Sus where, it seems, Anschel Gruber lived at the time of his marriage.

We drove to Vicovu de Sus, about 1/2 an hour’s drive, up at the border with Ukraine — there is a border crossing there for local people. It’s a village strung out for seeming miles along one road… with the help of a couple of very nice local policemen, we found what we believe was the house, an old wooden farmstead, set down a dirt track, amid cornfields, well of the road (apparently an elderly woman, as well as a barking dog, lives there — and she does have a satellite dish…).

(This duplicates a post on my Jewish Heritage blog)

Located near the Borgo Pass that separates Transylvania from Bucovina, Bistrita as a town dates back nearly 1,000 years and was a Saxon stronghold and trading center in the middle ages. It has a charming old town center, whose main attractions include a 15th/16th century Evangelical church and a long row of arcaded houses from late medieval times. (There’s also a very pleasant pedestrial street, with a tempting collection of sidewalk cafes.)

The town also has a fine synagogue, built in 1856. It has been restored — with major funding from various Japanese sources — and is now used as a concert hall and cultural center.

There didn’t seem to be any signage, however, denoting it either as a synagogue or as a culture center/concert hall… Work was going on restoring the outer walls, and it didn’t look open. A young woman, however, was sitting on a park bench across the street (near a Holocaust memorial located in in the park) and she came across with the key to open up when she saw us trying the door.

From Bistrita, the road goes over the pass — we pit-stopped at the kitschy Dracula’s Castle Hotel, where I stayed 3 years ago; dipped into the tourist market, whose best wares seemed to be some retro-looking hand-painted garden gnomes. I was glad to find that the road over the pass is undergoing serious repair work…

At Vatra Dornei, we stopped to take a look at the derelict, Moorish-style great synagogue, built in 1902, which looms over the main street of this once-grand old spa town (and source of major brands of mineral water). Years ago I attended a Hanukkah celebration here, when I toured Romania during the festival with the then-chief rabbi, Moses Rosen… The sanctuary was brightly lit and crowded with people in winter coats and fur hats, and a Jewish children’s choir performed. Most of the Jews who lived there have now either died or moved to Israel (or elsewhere). I have no idea what the fate of these once-magnificent building will be….It looks no better but no worse that it was when I saw it 3 years ago; but time will take its toll. What to do with buildings such as this, large, impressive structures that need much work and a fitting, dignified use, was the subject of the Jewish heritage seminar in Bratislava in March, which I reported on at that time.

Given my Candlesticks project, I paid attention to the candlesticks/menorah motif that edges the top of the building.

First day of the cousins and candlesticks trip…. my cousins Hugh Rogovy and Arthur Schankler and Hugh’s son Asher are joining me on my research trip to Radauti, in northern Romania, to work on my (Candle)sticks on Stone project, about the representation of women in Jewish tombstone art. My project isn’t a “roots” project, but Radauti is the town from which our grandparents emigrated to America and where Ettel Gruber, the great-grandmother of Hugh, Arthur and myself, is buried.

Hugh, Asher and I picked up Arthur at the Budapest airport this morning, and we drove all day, winding up tonight in Bistrita, in Transylvania (a town known to readers of Dracula…. we are staying tonight in a modern hotel named after a fictional one in the novel).

I haven’t been to Romania in three years, so I’m interested in seeing the changes, now that the country is in the EU. There certainly seem to be more roadside hotels, restaurants and advertising, and there has been some work on the roads themselves…. We’ve eaten wonderfully today. Ciorba at a gas station cafe, served with cups full of sour cream and hot pickled pepper… tonight in Bistrita, everything from mamaliga with Branza cheese to stuffed cabbage (sarmale) at a terrific traditional restaurant, Crama Veche….

On to Radauti (and the ancestral village, Vicovu de Sus) in the morning.