The wonderful imagery on East European tombstones was created by talented and extraordinarily creative stone-carvers who are now, for the most part, anonymous. Everyone so often, a photograph of a more recent traditional stone-carver turns up. Sergey Kravstov has sent me the image below. 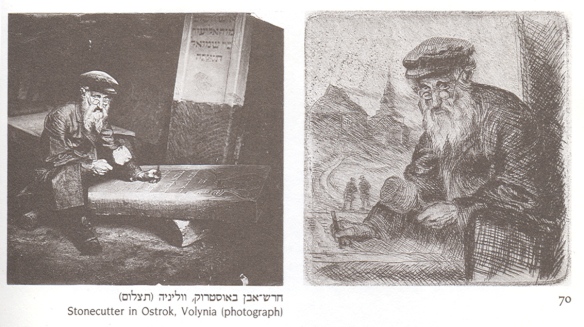 The illustration is from the catalogue: The Jewish Art of Solomon Yudovin (1892-1954). From Folk Art to Socialist Realism, by Ruth Apter-Gabriel (Jerusalem, 1991). Yudevin was a wonderful artist born near Vitebsk, the same town where  Marc Chagall was born.

The drypoint at right, dated 1939, is clearly based on the photo at left, taken in Ostroh/Ostrog in Volhynia — probably during the  expedition into Ukraine led by the Yiddish writer An-Sky  in 1912-14 to document the rapidly disappearing Jewish cultural life of the shtetl.  This would mean that it was taken by Yudovin, who was a photographer on that expedition. It’s a very dramatic shot and to me looks staged!

I have tried to figure out what the design he is carving is — but I can’t make it out….

Here below is a wood cut by Yudevin that shows a funeral at a shtetl’s  Jewish cemetery — including the gravestone of a woman that bears the typical candlestick motif. 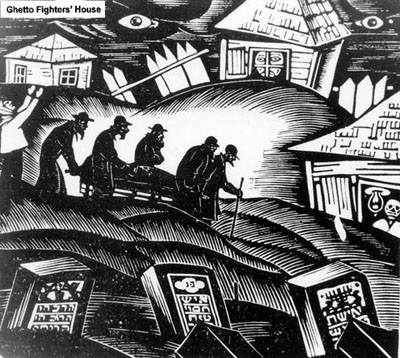